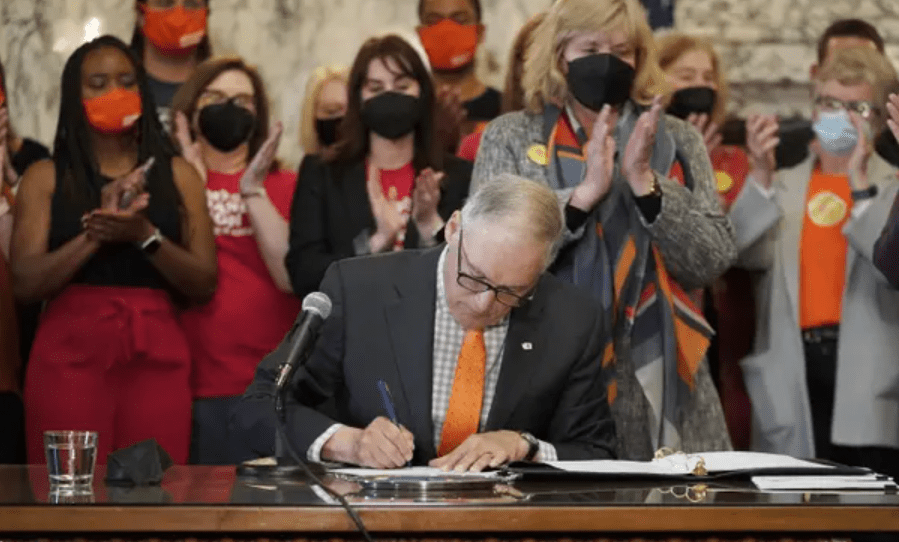 New legislation also prohibits open or concealed carry from ballot counting sites or on-campus school board meetings and another that adds further restrictions on ghost guns.

“We are not willing to accept gun violence as a normal part of life in the state of Washington,” said Inslee, a Democrat, at a news conference where he was surrounded by lawmakers and other supporters of the new laws.

The capitol was closed to the public for several hours before and after the bill signing. A spokesperson for the Washington state patrol said that there was no specific threat, but that the temporary closure was a “prudent precaution.”

Washington’s measure, which takes effect 1 July, does not prohibit the possession of such magazines. It also includes exceptions to magazine limits for law enforcement and corrections officers, members of the armed forces, Washington’s national guard and licensed firearms dealers who sell to those institutions.

Violations would be a gross misdemeanor, which in Washington is punishable by up to 364 days in county jail, a maximum fine of up to $5,000, or both.

The measure was requested by the Democratic attorney general, Bob Ferguson, who said he was motivated to push for the bill after a 2016 shooting at a party in Mukilteo in which a 30-round magazine was used, killing three teens and seriously injuring another.
“It’s individuals who are directly impacted by gun violence. When they speak, politicians respond,” Ferguson said.

The new law also makes selling a prohibited magazine or offering one for distribution or sale a violation of Washington’s Consumer Protection Act, which allows the attorney general’s office to take action on alleged violations of the act to get restitution and civil penalties.
In a statement issued after the bill signing, the Sacramento, California-based Firearms Policy Coalition said that it plans to lead a lawsuit over the new law, saying that it “condemns this latest act of state aggression and will not allow this law to go unchallenged”. The group said it was looking for Washington residents who could be potential plaintiffs in the planned action.

Ferguson said he was confident that the ban was constitutional and that his office could successfully defend any potential litigation. He pointed to appellate history with other states with bans, including California, where the ninth circuit court of appeals overturned a ruling by two of its judges and upheld California’s law in November.

Inslee also signed a measure that prohibits people from knowingly bringing weapons either openly carried or carried with a concealed pistol license to ballot counting sites and on-campus school board meetings. The new law also bans openly carried firearms at local government meetings and election-related facilities such as county election offices, off-campus school board meetings and local government meetings, though people who have concealed pistol licenses would be allowed to carry their concealed.

Firearms are already prohibited at several designated places statewide, including restricted areas of jails, courtrooms, taverns and commercial airports. And last year, lawmakers approved a ban on openly carrying guns and other weapons at the Washington state capitol, part of the capitol campus and public protests statewide.

“No one should be prevented from accessing their government due to fear of armed intimidation,” said representative Tana Senn, the bill’s sponsor.

Law enforcement is exempt from the restrictions, as are any security personnel hired at a location.

Violation of the law would be a misdemeanor, punishable by up to 90 days in jail and fines of up to $1,000. Second or subsequent violations would be a gross misdemeanor.

Additionally, any person convicted would have their concealed pistol license revoked for three years. Under the measure, a person must knowingly be in violation of the law for the criminal penalty to apply.

A third measure signed by Inslee on Wednesday adds further restrictions to the law on the manufacture, sale, or possession of so-called ghost guns by prohibiting people from possessing components to build an untraceable firearm, as well as possessing any firearms built after 2019 that do not have serial numbers. Hobbyists will be able to continue making guns at home, but under the new law they must use components with serial numbers.