Debunking the “Mass Shootings are a Mental Health Issue”

Published in 2016 by American Psychiatric Association.

FACT:  The overall contribution of people with serious mental illness to violent crimes is only about 3%. When these crimes are examined in detail, an even smaller percentage of them are found to involve firearms.

FACT:  Laws intended to reduce gun violence that focus on a population representing less than 3% of all gun violence will be extremely low yield, ineffective, and wasteful of scarce resources. Perpetrators of mass shootings are unlikely to have a history of involuntary psychiatric hospitalization. Thus, databases intended to restrict access to guns and established by guns laws that broadly target people with mental illness will not capture this group of individuals.

FACT:  Gun restriction laws focusing on people with mental illness perpetuate the myth that mental illness leads to violence, as well as the misperception that gun violence and mental illness are strongly linked. Stigma represents a major barrier to access and treatment of mental illness, which in turn increases the public health burden. Mass shootings understandably create outpourings of public horror and 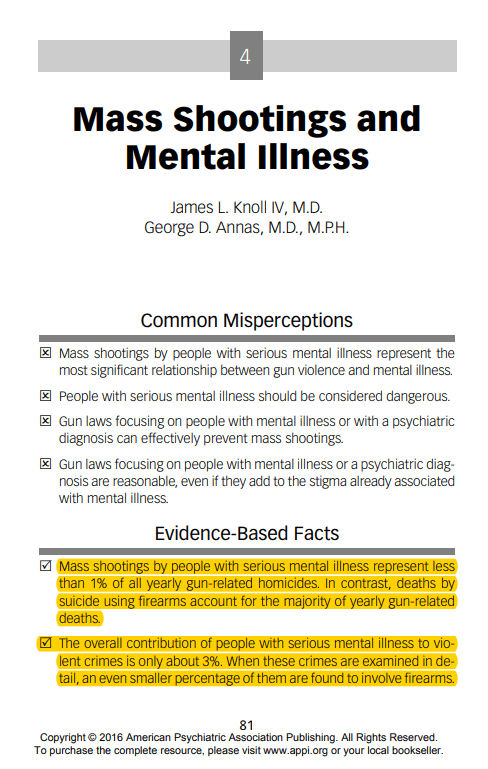