On April 26, 2022, the Boston Globe reported a disturbing increase in handgun carrying among youth in New England.  As outlined in the chart below, Rhode Island is outpacing Connecticut and Massachusetts; New Hampshire, Vermont and Maine saw sharp increases. 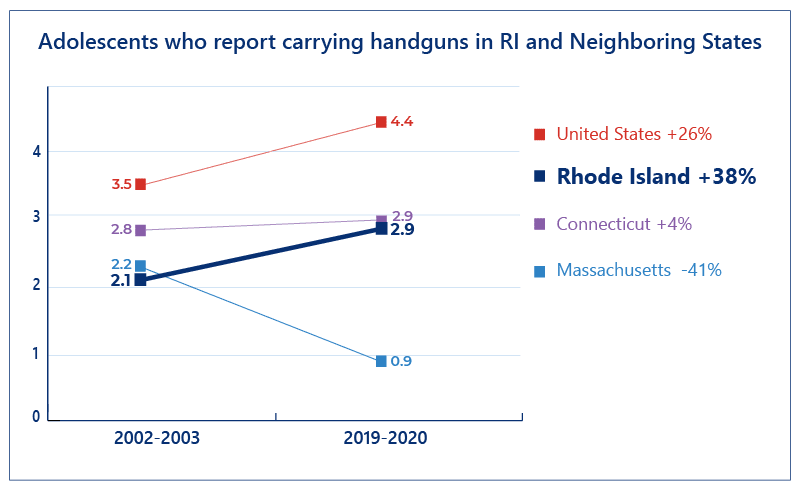 Nationally, the sharpest rise is among white teens and those in families with the highest annual incomes (those making $75,000 or more). They also found a significant increase among youngsters in rural areas.

“It’s really important for people to not assume they know what kind of kids carry guns, and that goes for pediatricians and public health workers,” said Naoka Carey, a doctoral student in Boston College’s Lynch School of Education and Human Development and a coauthor of the study. “You need to be educating families and young people about the risks for carrying a gun, whether they come from a low-income or high-income family.”

There was no state-specific data reported regarding demographic trends among youth who reported carrying handguns.

This comprehensive study outlines the prevalence of adolescent handgun carriage, with attention to differences across sociodemographic groups. This is a nationally representative survey examines surveys from 2002-2019, conducted among youth ages 12 to 18, and was designed to probe sensititve questions and illegal conduct.