Along with the huge spike in FBI NICS Firearm Background Checks and gun sales from 2020 and 2021, there has been a corresponding surge in road rage shootings. NBCNews reports that 2021 was the “worst year on record” for gun violence on streets and highways.

These shootings have become so common that police departments in some Texas cities have begun to specifically track road rage incidents that result in a shooting.

A Person was Shot and Killed or Injured in a Road Rage Incident Every 17 Hours, on Average, During 2021

In an April 2022 report on Road Rage Shootings, Everytown for Gun Safety analyzed Gun Violence Archive’s database and found that more than 500 people were shot or killed by a gun in over 700 incidents – on average, 44 people per month, which was double the pre-pandemic average. 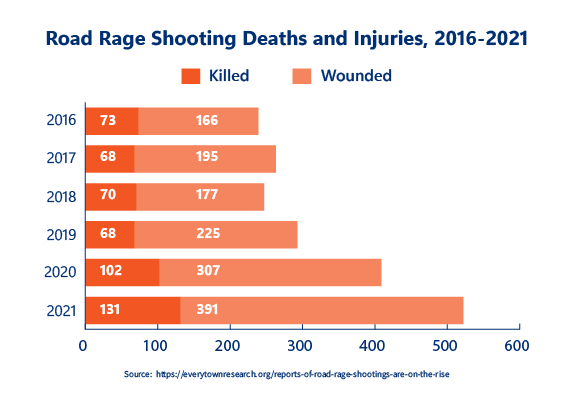 Below we list 10 media reports of road rage incidents in Rhode Island that involved a gun. Fortunately, no one was killed and only one person was injured.

>> December 2021
A driver reported to police that he was followed off the highway and his back window was shot out; no arrests were made, investigation ongoing.

>> September 2021
A bullet grazed head of man involved in skirmish in a Walmart parking lot; felony assault and weapons charges for shooter.

>> August 2021
A Cranston man was arrested with ghost gun after he pointed a gun at an off-duty sheriff on I-95 during morning commute.

>> August 2020
A man was arrested by South Kingstown Police for brandishing a stolen gun during a road rage incident.

>> July 2020
A man is arrested in East Greenwich who was reported as having displayed a hangdun and baton to another motorist during a road rage incident.

>> May 2019
A road rage incident ends in weapon and disorderly conduct charges for a North Providence woman who allegedly waived her handgun out of the window while trying to merge onto the Mineral Spring Ave exit rap from Rt. 146.

>> May 2018
One of the three assailants was armed with a gun during an attack on a man after accidentally backing into their car.

>> July 2016
A Providence Police officer follows two cars speeding together when the passenger of one car fires a gun in the air; the incident began when one car cut the other off.

You Can Help Prevent Gun Violence in Rhode Island: