Due to the intensity of the suspect’s gunfire and the large cache of weapons at his disposal, police response during the shootout on Denison Street included the use of a Throwbot robot and a Bearcat tactical vehicle.

The Throwbot, a robot with a camera, was thrown into the suspects apartment and remotely controlled from outside by the Providence Police Special Response Unit. The Bearcat armored tactical truck, operated on the scene by Rhode Island State Police, was used as a shield for officers as they returned fire. 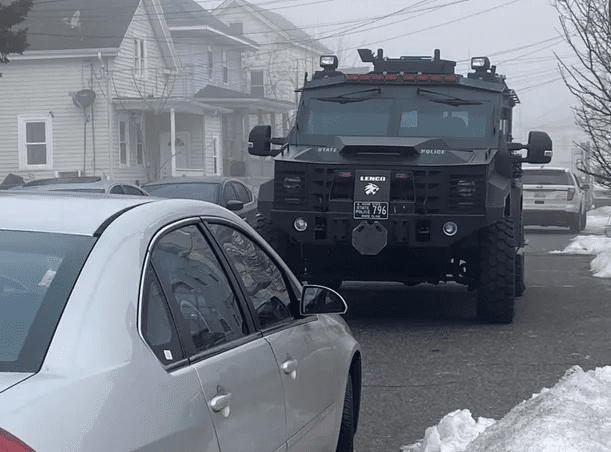 Col. James Manni said that the Bearcat has been called to 11 incidents in the past year at eight different municipalities (three in Providence), “It is used in extreme circumstances,” said Col. Manni, such as high risk warrants or hostage situations.

The situation began when police responded to the home around 2:00 a.m. to investigate an alleged domestic assault. The suspect, Scott MacLean, barricaded himself in the home and the police evalucated the property. Maclean’s children told police there were “at least 15 guns in the home and some rifles in a safe.” The standoff ended hours later with MacLean committing suicide.

A History of Mental Health Issues

Police said MacLean’s family members reported he had been treated for mental health issues, but it is not yet known if that would have prevented him from possessing firearms.

Whether MacLean had a blue card or a concealed carry permit is unknown; both the Department of Environmental Management and the RI Attorney General’s office noted that they are prohibited by law from disclosing that information.