Ms. King Harris is the Executive Director of the Rhode Island Coalition Against Domestic Violence (RICADV), a founding partner of the Campaign for Gun Violence Prevention Rhode Island (CGVPRI). 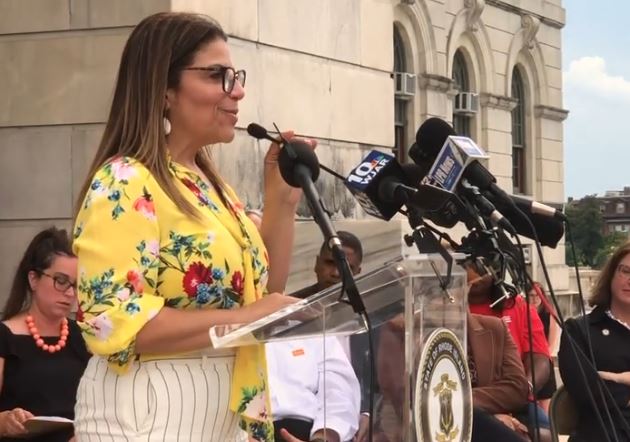 Good afternoon and thank you to Governor McKee for having us here today and thank you to all of the Rhode Island state leaders joining us here in support of this important legislation. I am Tonya King Harris, Executive Director of the Rhode Island Coalition Against Domestic Violence. On behalf of our statewide network of member agencies and SOAR, our taskforce of survivors, we appreciate this opportunity to express our strong support for these critical gun safety bills. It is time to make Rhode Island safer for all.

Our community has been deeply affected by the recent escalation in gun violence. Passing these bills this year is essential to protect our community and especially victims of domestic violence and their children. Every legislative session, brave survivors members of our taskforce SOAR testify about their lived experience as an intimate partner violence survivor, many of them directly threatened with gun violence by their abusive former partners. They speak for all survivors and their children, and they speak for the silenced victims who are killed every year in Rhode Island due to gun violence.

Women in abusive relationships are five times more likely to be murdered by their partners when that partner can access a gun. The risk to the lives of the victim’s family, friends and bystanders increases when the abuser has access to a firearm. In Rhode Island from 2006 to 2015, every bystander who was murdered during a domestic violence incident was killed with a gun.

We have also seen the use of military-style high-capacity magazine assault weapons that are capable of killing the most victims in the shortest amount of time, with much higher fatality rates in mass shootings. These individuals enjoyed easy access to these most dangerous firearms. For the lives of victims of domestic violence, bystanders, responding officers, first responders, and community members, it is critical to have clear and enforceable laws to keep guns out of the hands of dangerous individuals and to limit access to military-style weapons and high-capacity ammunition capable of causing so much violence and harm in our Rhode Island communities.

We urge our legislators in the Senate and House to pass these critical gun safety bills this year, limiting the access of these deadly weapons and keeping our communities safe and healthy for our neighbors and families.